On the morning of June 19, 1865, Union Major General Gordon Granger arrived on the island of Galveston, Texas, to take command of the more than 2,000 federal troops recently landed in the department of Texas to enforce the emancipation of its slaves and oversee a peaceful transition of power, additionally nullifying all laws passed within Texas during the war by Confederate lawmakers.

I’ll continue to thrive so I can ride!

“Inflammatory diseases and degenerative processes have greatly increased in the last decades and parallel the industrialization of food and modern life style.” 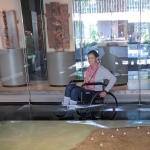